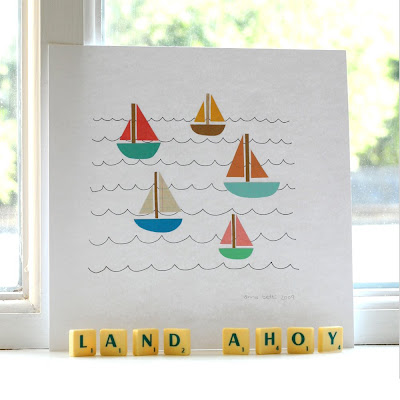 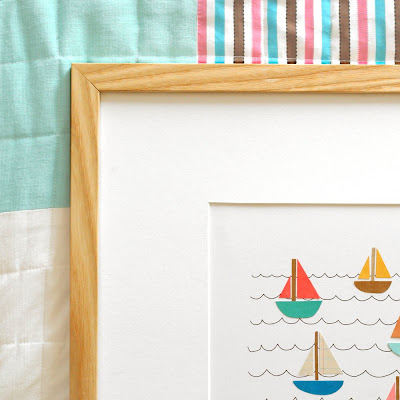 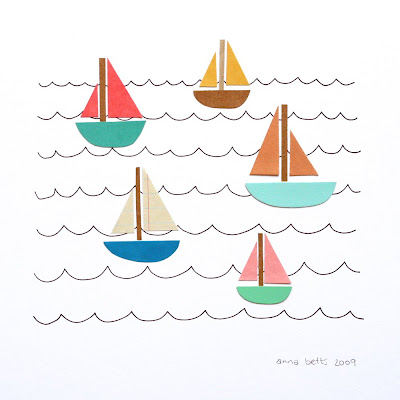 I've been rather quiet blog-wise of late as I've been up to my gills in picture framing for Open Studios in Cambridge. But the end is in sight and I've today had the luxury of sitting in the cool, watching Wimbledon and making boats out of bits of paper!

In case you wondered, I'm feeling a little nautical these days as we're off to the seaside this weekend! It's going to be my first caravanning holiday and I'm really rather excited. In my head it's all gingham covered seat pads, brightly coloured thermos flasks and tasteful-but-floral-60's-pattern awnings. In reality I suspect it will be white plastic garden furniture, screaming kids and Spam.

Either way, I've come up with a new set of collages with a boat-y theme. The first of which is now listed.
PS - An interesting and sickeningly cute fact about me and boats, I used to call them "boaps" as a child. I nearly called the collages my "Boap" series but thought nobody would find them on Etsy...
Posted by Anna Betts 5 comments: 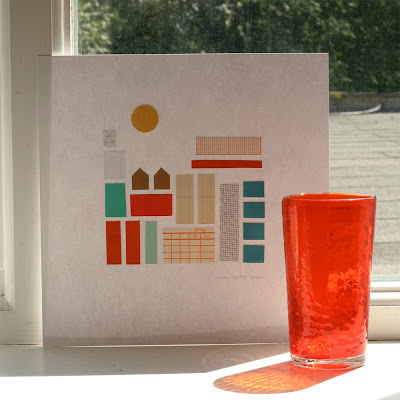 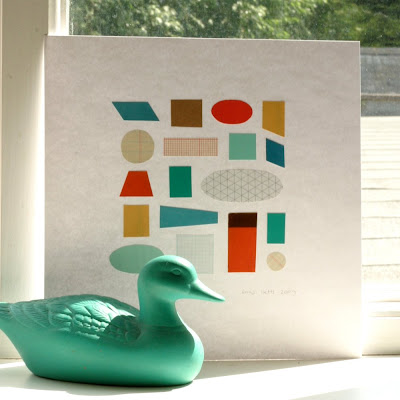 Don't you just love how hot colours look in the sun? It's unfortunately not something I get to see very often living in England but oranges and turquoises are just amazing in summer! Don't get me wrong, I think us Brits do understated elegance very well indeed, but sometimes a zing of Valencia orange or tropical blue can't be beaten. I found these old music score sheets in a second hand shop a few weeks ago with Lucie (I found the books there, not Lucie, can't put a price on her!) and have just been gawping at their colours since.  Then I bought a pair of bright red hand-blown glasses in a charity shop this week (one pictured) and it reminded me to make something of these bright colours. 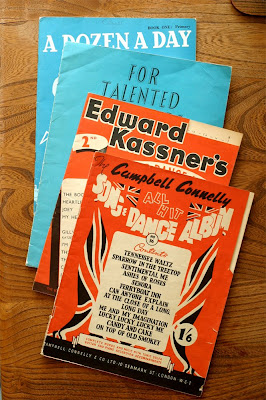 These ones are now in the shop.
Posted by Anna Betts 6 comments: 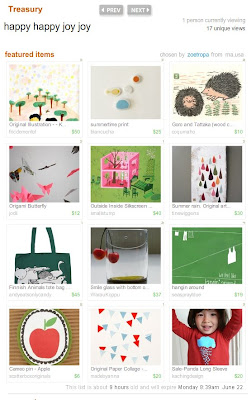 I really liked the items in this treasury that featured my bunting collage. How cute is this brooch? And this painting?
Have a great weekend all, fingers crossed for a bit of sun :) 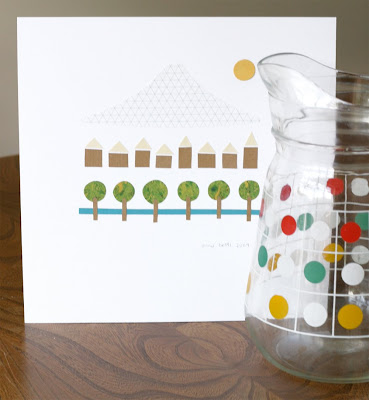 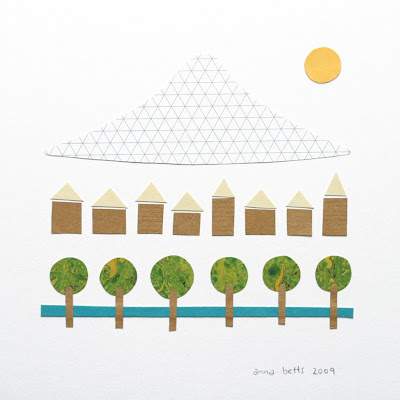 Since I started my degree and have been drawing from life more, I've realised how much I get a kick out of drawing with perspective and vanishing points in mind. I suppose it makes sense as I love geometric puzzles, linear drawing can be quite logical I suppose. In any case, it was only when I was trying to think how best to lay out my pieces for my parallelograms collage yesterday that I started thinking about traditional Chinese perspective and how it's different to western perspective in art.
The idea of layers and rows of similar objects really appeals to me and I think is evident in my work so far, and certainly in the objects I like to have around me - my letterpress tray a perfect example. Making landscapes using this rule of thumb hadn't really occurred to me before I made this new collage featuring bubble trees and houses with a mountain in the background. By simply arranging one layer below the last it creates simple perspective but I think there's something really oriental about it. I guess it's the mountain too, it just reminds me of a Hokusai painting where there is usually a presence of a large volcanic-looking mountain.
This one is now in the shop.
Posted by Anna Betts 5 comments: 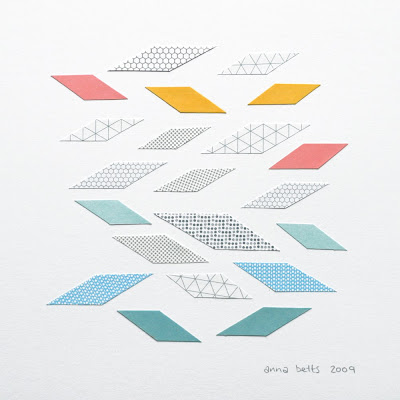 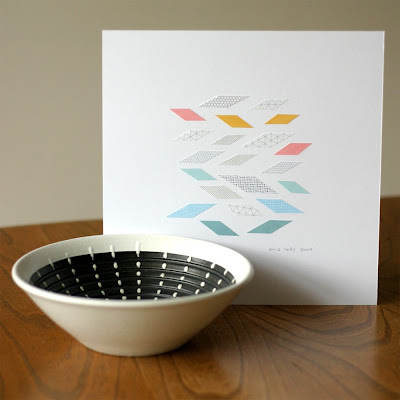 I can't help myself when it comes to geometric shapes. I even like their names, trapezia, parallelograms, dodecahedrons. Yum.
This little collage was my returning to an old idea I'd had in a dream of a kind of landscape or cloudscape I suppose. It's hard to explain. But anyway, all the way into the distance were these shapes of different colours. It's now in the shop :)
Posted by Anna Betts No comments: 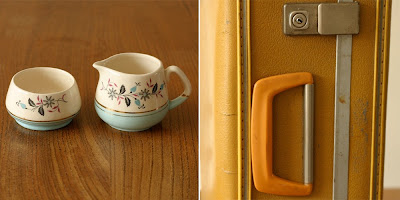 These were my latest finds from the car boot sale at the weekend (and Yes Ursula, people do sometimes sell straight out of the back of their cars, but usually have a trestle table!). The best finds for me were the printing blocks, not just because I love the mixed sizes and styles of letters but because of the graph paper block that I found! You won't have had to have read my blog for long to know that I'm pretty crazy for graph paper so you can imagine my excitement at the prospect of printing my own, in any colour I want. Seriously, this is like the best thing that's happened all year! I only wish the letterpress room at uni were open over summer but I fear I shall have to wait until October to try these little guys out :(
Until then, I will very much enjoy taking my little yellow suitcase (Jacob bought a matching red one) on our caravanning holiday in a few weeks with friends, deciding whether to keep sewing supplies or art materials in my vintage folding-out sewing box, and having imaginary tea parties with my newly matching sugarbowl and milk jug!
Posted by Anna Betts 10 comments: 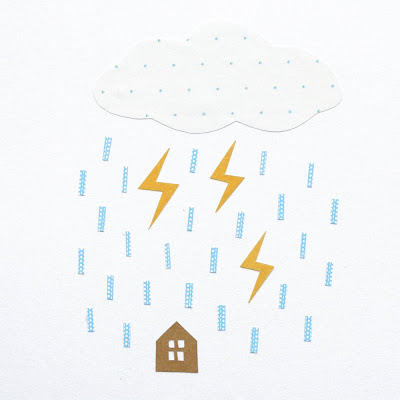 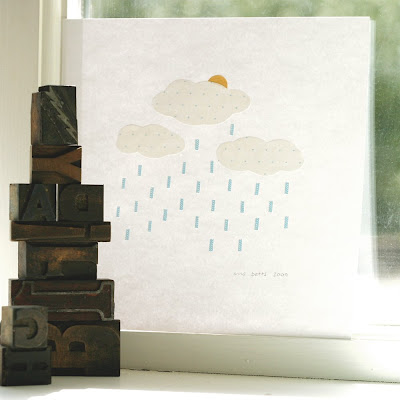 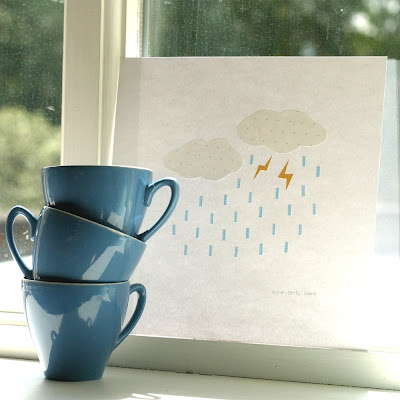 Hello folks, hope you've had a nice weekend. We went up to see Jacob's parents and went to a huge car boot sale (needless to say I'll have pics of my finds soon...), and I'm really rather excited about one find in particular. But you'll have to wait and see what it is...
In the meantime you can enjoy the new collages I've been working on which are now in the shop. Let's just say I've been inspired by the English summer! 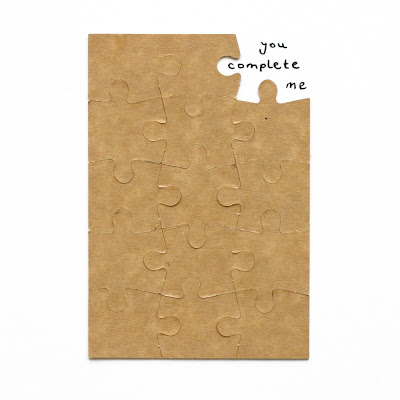 I've also added this mini collage to the shop, what can I say? I'm a soppy one really...
Posted by Anna Betts 2 comments: 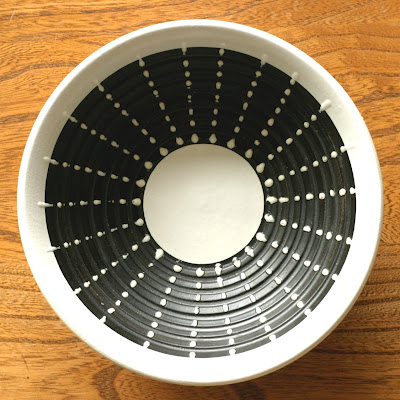 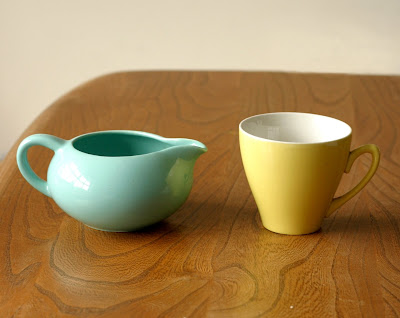 So Lucie and I went round the charity shops in Cambridge on Tuesday and found some little gems! I love this Denby bowl and this Crown Ducal milk jug. The colour is so pretty! The little yellow cup was only 50p but will eventually have a little plant growing in it I suspect.  I also got a couple of quite heavy wooden trays that are like empty box frames of 16x16" which are begging to be painted and filled with stuff, maybe like Jospeh Cornell's boxes which I have a bit of a thing for. I may omit the bird stuff, but I like all the balls and moving parts he used to include. 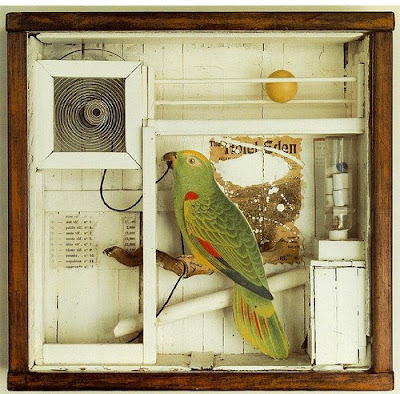 I am currently rather jealous of this found by Francesca, I even think I had a dream about it last night! I can't wait to see what she does with it! I'm also excited to see what Lucie's been doing with her vintage finds from Tuesday, she found some great things which I'm sure she'll be showing off soon, it was a bumper day of bargains!
Posted by Anna Betts 4 comments:

You're having a graph! 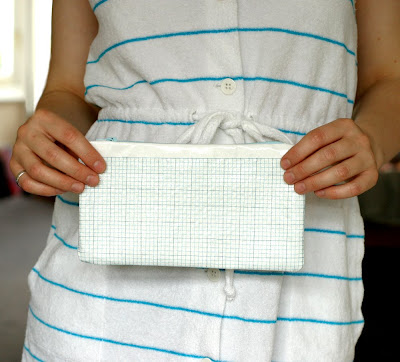 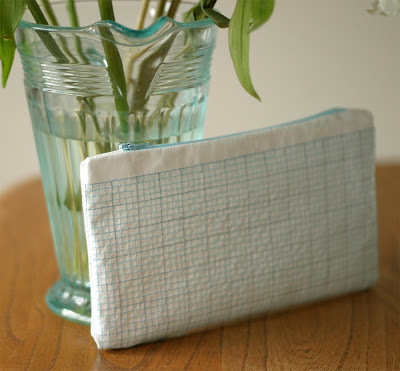 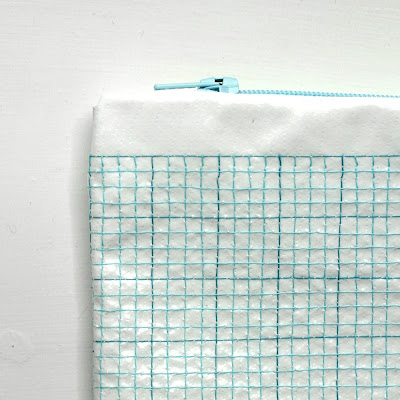 And so am I, as I'm pretty pleased with this new design of pencil case! It's now available in the shop. I've been playing around with the self timer on my camera and using a tripod to take piccies. I love my tripod, it's a proper Manfrotto one and is so nice and clunky to use. You can't beat a good piece of ergonomics I find. Seriously I need a life folks, who says "you can't beat a good piece of ergonomics"!? Dearie me.
Anyway, Lucie and I are off bargain hunting tomorrow so perhaps a bit of human contact will sort me out.
Have a good evening all, the lasagne's ready here so I gotta go :)
Posted by Anna Betts 8 comments:

Newbies in the shop 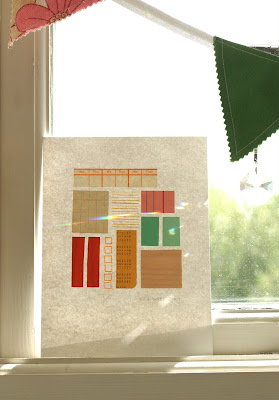 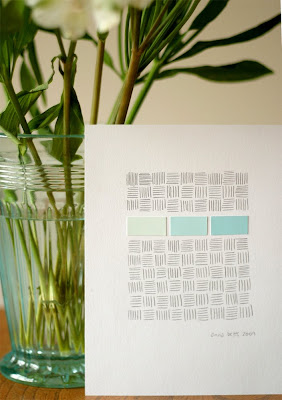 No, that's not the name of my one-woman tribute to New Kids on the Block, but news of some new collages in my Etsy shop. Like you couldn't tell...
We've mostly been avoiding Strawberry Fair today which happens every year on the common just near us. It sounds charming but alas is not. Don't get me wrong, it's fine to go to once or twice but that's it. I personally don't enjoy urinating in public spaces, being rained on, having to listen to awful music and paying way over the odds for bad falafel. Also all the local lads come out to fight with the rainbow-clad visitors which is a bit scary. I realise I sound like I'm in my fifties but it's just not really my bag. We did enjoy the beer festival that happened a couple of weeks ago here so it's not like I'm not immune to having fun, honest!
Anyway, I hope the rest of the weekend is good for you :)
Posted by Anna Betts 1 comment:

This. I've treated myself as I got a 1st for my year's work at university!! I'm so happy, and as a special bonus, Jacob is cooking me a mysterious (yet delicious smelling) dinner and we have fizzy wine! Hip hip hooray!
Here are a few examples of how others have treated their letterpress trays: 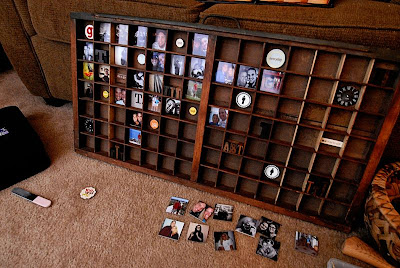 I love this lovely inky one on Taylor Groneck's blog 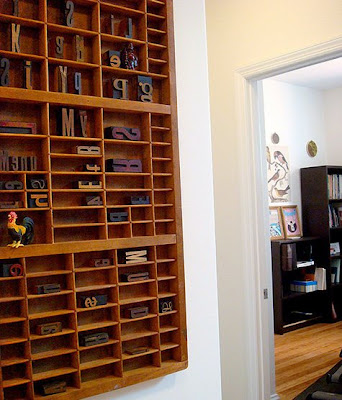 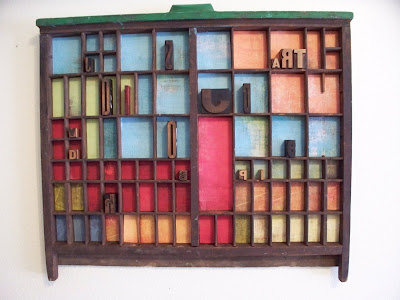 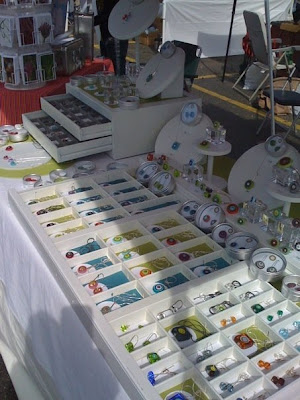 And the way Kristin Perkins displays her jewellery.
*********
Update: I just looked at this post next to yesterday's one with my full stops collage and realised my love of repeated forms and order is really showing at the moment! OCD anyone?
Posted by Anna Betts 6 comments: 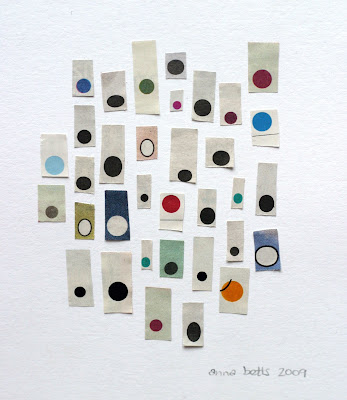 I've been invigilating a GCSE exam at the school I used to work at this morning. I was so nervous on behalf of the kids sitting the exam I couldn't stop twitching and moving about, two hours of maths ain't my idea of fun I can tell you! I hope they've all done well.
This is a little collage I did the other day whilst reading/chopping up the Saturday papers. Poor Jacob, there's always an article he wants to read with a piece approximately 1cm square missing! Still, he could use these holes to his advantage and spy on people in the park! Perhaps I'll suggest it to him.
Posted by Anna Betts 4 comments: