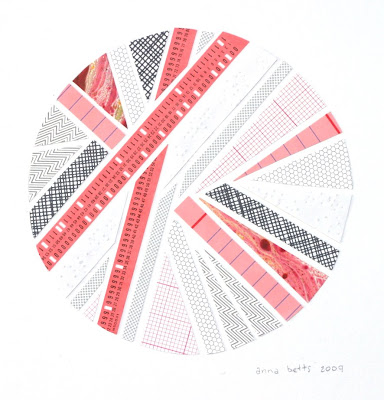 Couple of newbies in the shop today, see what you think. I'm really enjoying cutting out the "geometry lace" as I like to think of it, in the Spring Green collage. It takes a while but is one of those really satisfying jobs when you've got a brand new scalpel blade! I hope that doesn't make me sound too weird...
Anyway, happy weekend all. I hope it's sunny where you are.
Posted by Anna Betts 6 comments: 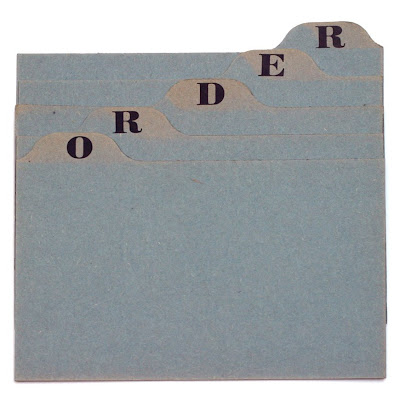 Last week we had a crit for the typgraphy brief we'd been working on and this was my simplest and favourite piece of my own work, but there was some amazing stuff done by others. I thought these old record cards were lovely, especially with their faded tabs. It was weird, the day we were set the brief I came home from uni and found a stack of them on the "recycling shelf" (shelf outside my house for people's unwanted stuff - stuff which regularly ends up in my room). So that made things easy, I just added letraset letters and hey presto. Simple but does the job nicely in terms of conveying the meaning.
I spent ages on this one, as it needed photographing from two different angles and then assembling on Photoshop. Good thing to know how to do, you just never know when a 3D image might come in handy!
Our brief over Easter is to work on 4 images of what it means to be English. So far I'm thinking about little polite notices we put up so that one doesn't have to cause a scene. Like "No Junk mail please" or "Kindly refrain from parking in front of my garage". There are quite a few in my neighbourhood, it's posh. What do you think though, any ideas? 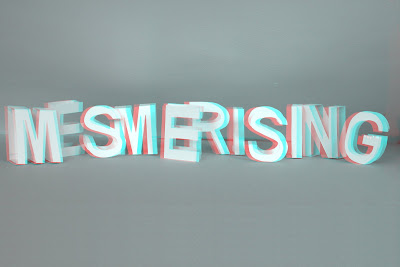 I'm working on a set of 12 new collages for Teresa at Art and Light gallery in Greenville, South Carolina. I don't want to reveal too much yet, so consider this a sneek preview. They'll be featured in the gallery from the beginning of May, I'm so excited!
Posted by Anna Betts 12 comments: 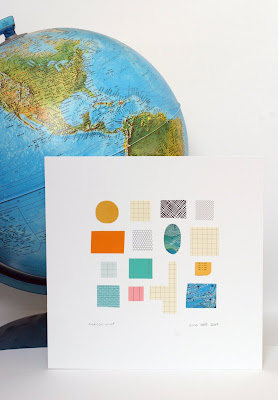 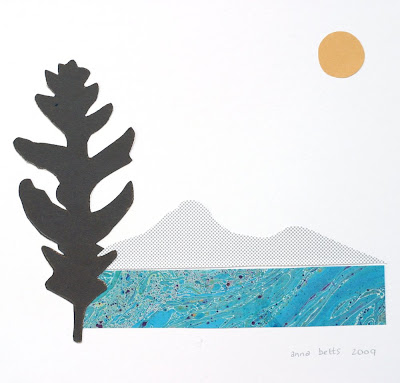 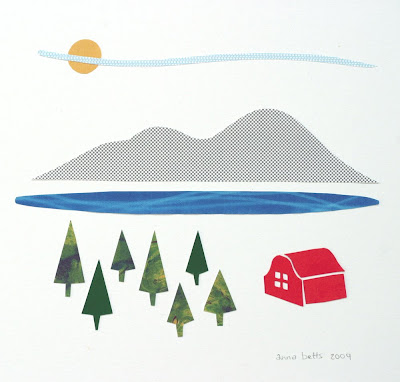 Well, after being featured on Decor8 on Tuesday my shop and blog seem to have had a few new visitors! So Hello if that's how you've found me!
Because of this, I've been spurred into a frenzy of collage-making activity and now have some nice new additions to the shop. I hope you'll have a closer look. Can you tell I'm dying to go travelling from these three?
I must really do some uni work now as I've not done a thing all week, will show you how I get on with the typography brief as and when I finish it... 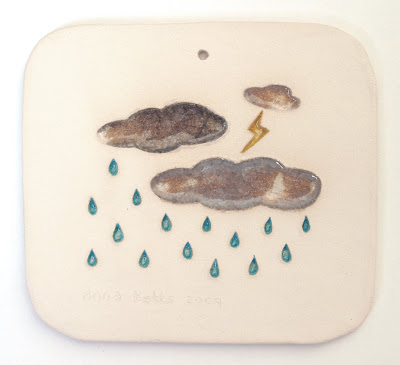 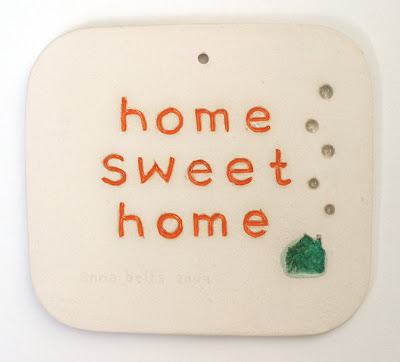 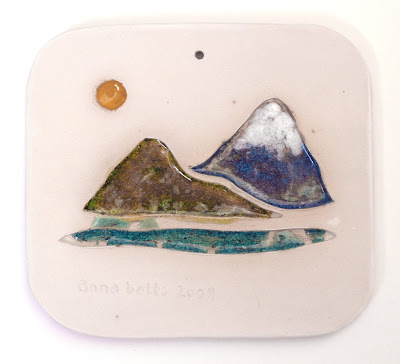 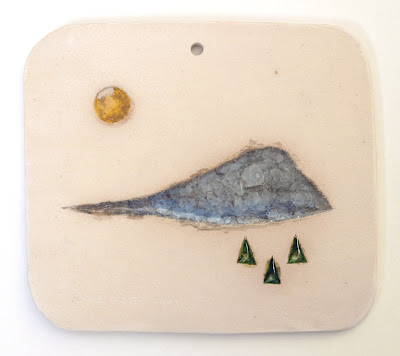 I've been busying in the pottery lately, and this is what I've come up with.
They consist of a rolled out piece of clay which is then cut and left until "leather hard". I then set to work with a sharp knife and clay needle to engrave into the surface of the tile to make little reservoirs for the glass to sit. The tiles are bisque fired and then the glass is put in and they get a glaze firing so the bits of glass melt into a lovely gloop. They're now ready to hang on the wall with one small nail.
I shall be listing the "Home Sweet Home" one in my shop this week, but the rest I'm reluctant to sell as they're my first go. I'll be whipping up some more soon though! There's already one in progress that features fir trees and a small owl. Twit twoo!
Posted by Anna Betts 5 comments: 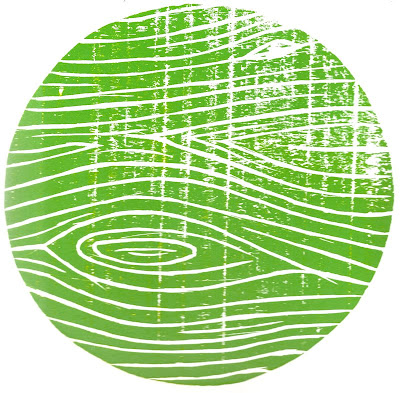 Yep, Organic.
I know what you were thinking though, and might I say this is a family show!
Ahem. Yes. So I'm working on the word "organic" for this typography project and was thinking of using this wood block in some way. I've done prints in yellow like the suns in my book to put in the etsy shop. The design measures 8" across so would be a lovely ball of sunny yellow loveliness to frame and adorn your wall. The yellow ink was still wet this morning though, so prints might be a few days still... What do you think? Reckon I'd sell a couple?
In the meantime, Belinda over at gretchenmist has tagged me in the 5 addictions game. So here goes:
1. Tea. Up to 7 cups a day with a little milk and no sugar please :)
2. Making things. I'm doing something creative every day and that's the best part of being back in education after working for a few years. You appreciate the time you have and don't always come home feeling too tired to lift a pen or set the sewing machine up. It's truly a luxury.
3. I almost daren't confess to the blogging community that I smoke, for some reason I feel like I might get a cyber slap on the wrist! But hey I'm and adult and I'm putting it out there. And it's not as if I'm not a 40-a-day gal by any means...  if it helps I'm more early SATC Carrie than Dot Cotton. Okay?
4. Eating! Well more specifically, cooking and eating. Whenever I'm feeling happy, sad, mad, bad, glad, tired, grumpy whatever - some sort of cooking cheers me up. Which is rather handy for the boyfriend who is one of those annoying skinny people who eats LOADS.
5. Hoarding. Unfortunately it's a family trait. I not only hoard the leftover bits of stuff that knock around my house because one day I'll make them into something really cool, but I also actively collect pottery from charity shops, car boot sales and occasionally ebay.
So there you have it, I hope you feel like you know me a bit better! I'm tagging 5 others to find out their addictions: Lucie, Francesca, Joanna, Jodie and Louise
Posted by Anna Betts 3 comments:

Something beginning with "Me"

Our current brief at uni is typography-based and we have to experiment with letterforms and ways of making them convey the word they spell out. One of my words is mesmerising (I think. I may still change my mind...) and I got looking at Ishihara tests. They are for testing colour blindness but are amazingly beautiful in themselves I think. So I thought I'd spell out the word in one set of coloured dots and surround it with an opposing colour scheme like in the tests. Do you think this conveys the word though? My other main idea was to make the letters out of card so they're 3D, then photograph them from two slightly different angles and make them into an anaglyph to be viewed through red and blue specs. Whaddya think? I had already looked at Bridget Riley but sort of wanted to steer clear of spirals and swirls...

In other news, I've been featured on two gorgeous blogs in the last couple of days, firstly on Jess Gonacha's Treasuring blog and then on the beautiful Art and Light blog by Teresa Roche. Thanks so much for the kind words you two! It was very exciting to wake up to this morning!
Posted by Anna Betts 1 comment:

There's a lovely exhibition up at Kettles Yard until March 15th called The Roundhouse of International Spirits. It features work by Ben Nicholson, Hans Arp, Julius Bissier amongst others who were all living and working in Switzerland during the 1960s. This image is by Ben Nicholson and is really inspirational when I think about the technique called scraffito that you use in pottery to scratch through a layer of slip to the underlying clay. I feel experiments coming on. Also, I've just applied to be a volunteer so I can help out at Kettles Yard, exciting!
Posted by Anna Betts 3 comments:

Just a quick post to say I hope you're all doing something nice in the sunshine! Things just look so beautiful when it starts getting sunny again, I forget how important daylight is sometimes, to my work and to my general mood. Also, I've been really enjoying Heather Smith Jones and Alicia Alferman's Noticing Project lately so did a pair of my own. I love pink and orange together.
Posted by Anna Betts 2 comments: 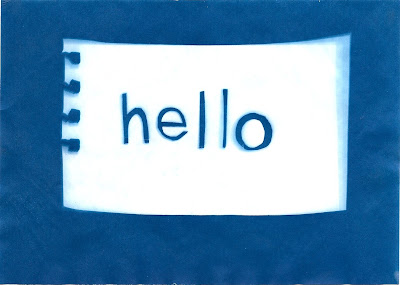 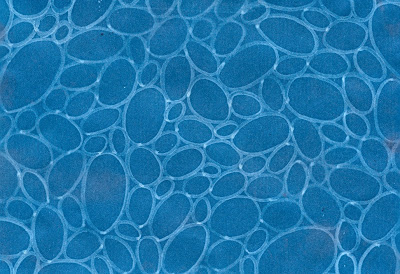 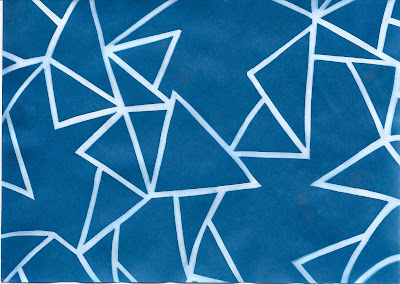 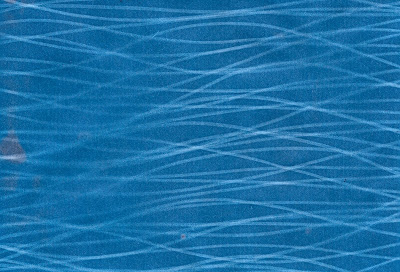 Today the sun came out! It was glorious here in Cambridge and so I whipped out my new pack of sun-print paper to have a play with. It's great stuff, you expose it like a photogram for a couple of minutes and then develop the paper in tap water for a minute and let it dry. Easy peasy. And although some have been more successful than others, the blue is just so yummy I almost don't care if things are out of focus. Wouldn't that last one make the best river in a paper collage? Hmm.....
Posted by Anna Betts 2 comments: 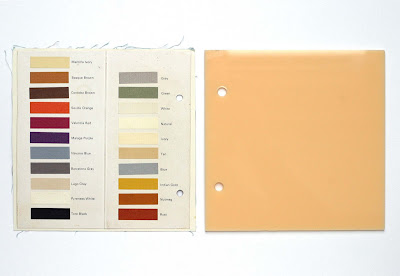 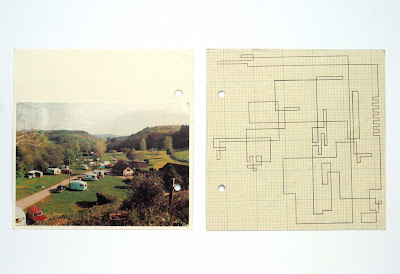 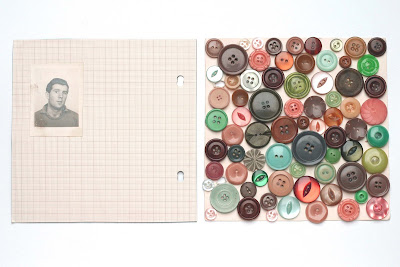 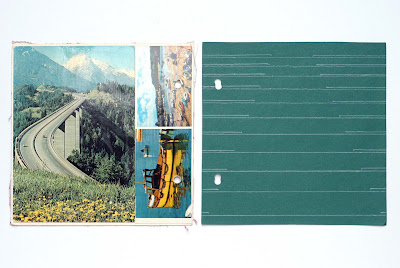 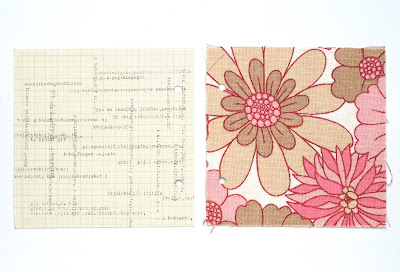 I was just rooting around in one of many boxes of stuff in my room, looking for old postcards, and found some old work. These were from a couple of roughly constructed scrapbooks that I made (5 whole years ago!) when I was on my Foundation year. That time was pretty exciting for me creatively speaking. I had set up a darkroom at home and had just got into finding old books in charity shops. I was making little flickbooks with graph paper and moving dots too. My tastes in stuff haven't changed all that much since then I don't think which is interesting but it's nice to see where certain ideas started that I feel I've picked up again since I've been doing my degree. I guess the gap in my education hasn't made all that much of a difference.
Posted by Anna Betts 3 comments: