I have to get some final printing started at least for this book project we're doing. So, this will be me for the next 3 hours on the awesome albion presses at uni. They are just so nice to use I can't describe..
Posted by Anna Betts No comments: 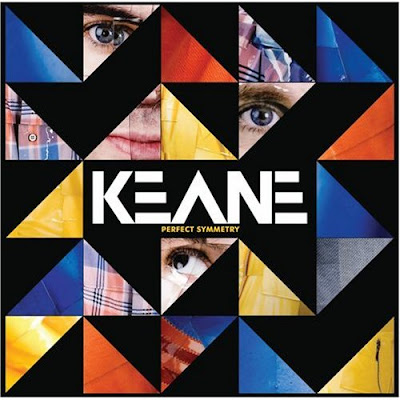 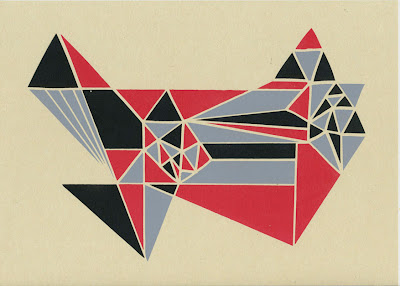 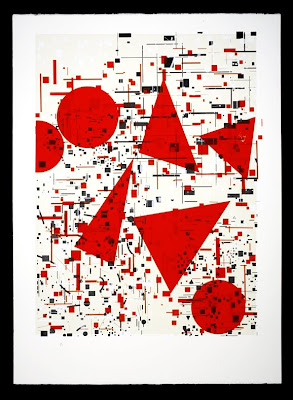 Have you noticed triangles popping up around the place? I have. I really, really like them! I'm a massive fan of Brandi Strickland's work, same with Marcus Walters and Kate Gibb but I only stumbled across the work of Jill Browning on etsy today and it has a really fun graphic style. She sells prints from her etsy store that opened only 2 weeks ago so go and have a look. Her work reminds me of amazing late 60's fabrics which can only be a good thing! 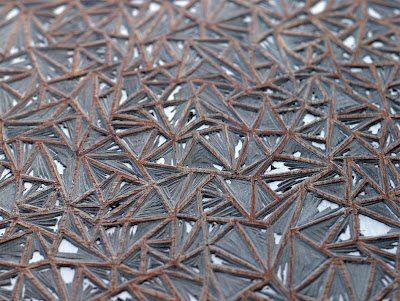 Phew! I'm having a break from my essay and just wanted to show off the linocut I finished this morning in front of Bargain Hunt. My fingers ache but I'm pretty pleased, I just hope to God it prints OK. I'll be printing it in a really pale grey as an icy background to some little coloured wooden houses for my landscape print project. I've got allsorts of lovely mountainous scenes planned but only two weeks to cut, print and bind them into a book... erk. It's fine, it's not as if I have an essay to write, another brief to start and finish and picture framing to do by Dec 11th or anything...
Oh yeah, in case you wondered it's not proper lino, it a vinyl tile from b+q as you get six 12" sq tiles for £3 as opposed to a 6x8" piece of proper lino for about the same. The tiles are easier to cut through, though that can be a mixed blessing as you can see where there are holes right through to the backing paper! But because it's so cheap I just stick another layer on the back once I'm done to give it strength. Seems to work OK. I was thinking of printing it up in colour at some stage too, I think turquoise or golden yellow would be just dreamy!
Posted by Anna Betts 3 comments:

This arrived in the post on Friday and I love it! It's called ABC3D and is by Marion Bataille.
I was researching pop-up books and cards for a project and found it online, it's so beautiful and clever. I love that it's black white and red too, it makes it a bit more of a grown-up looking toy. I'd have made a video of it myself if I could a) be bothered and b) do a better job than this one. Neither of which seemed likely given my state of absolute lethargy this afternoon. I've been doing quite well cutting a very complicated pattern in lino though, although I fear I may develop a hunchback if I'm crouched over like some sort of printmaking hobbit for much longer... 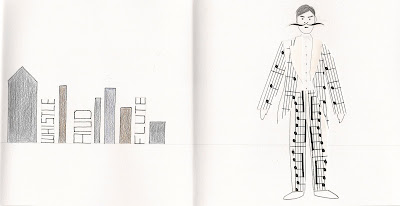 Our first proper brief where we have to come up with images from our imaginations was set a week and a half ago on the theme of Cockney rhyming slang, it's pretty fun but quite tricky incorporating the idea of the phrase and the meaning into one image.
I was quite pleased with this little chap, especially because of the moustache! It was also quite fun researching suits, I'd love to learn how to cut patterns and make jackets and stuff, if only there were time...
Posted by Anna Betts No comments:

Foxes are following me! 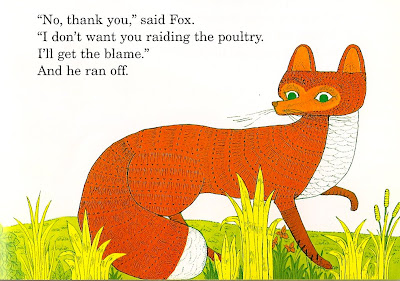 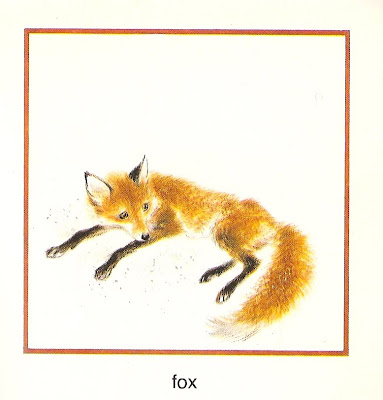 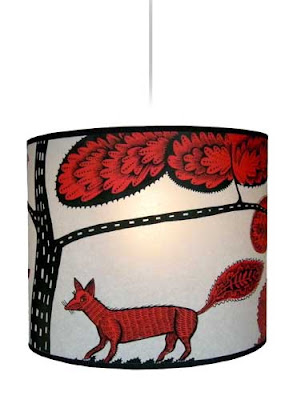 Ok, perhaps a little overly dramatic there, but seriously I keep stumbling across images of foxes in the last few days! Pat Hutchins' gorgeous patterned foxes in her children's books are so lovely, but then this poor little wispy character I dsicoverd in a "First Picture-Word book" whilst doing some illustration research has a certain charm. Lastly, in the paper yesterday I saw this rather handsome lampshade (available from www.ariashop.co.uk) and there ends my foxy story. For now.
Posted by Anna Betts No comments: 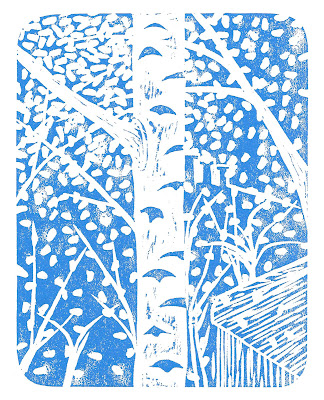 OK, I'm officially crap at blogging, it's been weeks!
Nevermind, I've got work coming out of my ears at the moment with uni. I'm writing an essay on 18th century Anglo-American artists, have a 6-week print project based on Chaucer's Canterbury Tales and another project illustrating cockney rhyming slang! It's all fun though, if a little exhausting! The image above was my best attempt at lino cutting (which I've now chosen to specialise in for the Chaucer task) and I rather like it.
If it weren't for the length of time those bloody oil-based inks take to dry I'd be bashing these out for Christmas cards but I fear they wouldn't be dry in time! I'm really looking forward to getting my print project started as I pretty much get to make images of whatever I want so long as I base them loosely around one line of the middle English text. The line I've chosen is "Even if I were to walk from here to India...", so I can muck about with the idea of a journey...
I cannot freaking wait to get my teeth into it!
Posted by Anna Betts 5 comments: