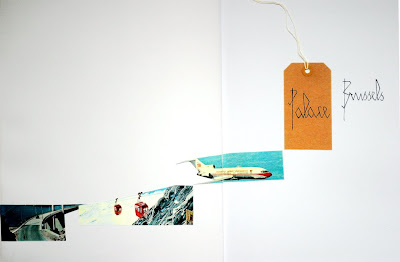 We're doing a big project at uni based on a theme of our own choosing. It's pretty daunting as it's worth half of the marks for the year for the core module so if it goes wrong we could fail the year! So we're all bricking it a bit.
I'm doing mine on my Grandpa's travels around the world in the 1960s and 70s. He was a tobacco trader working in Zimbabwe and regularly made trips to Europe, the Middle East and China sending postcards all the while. So I have a big box of them to use as reference as well as several amazing cine films he took whilst in places like Egypt, New Zealand and Rome. I really want to make the project my own so won't be using any original imagery, but will be doing lots of drawing and hand lettering from the pile of old business cards that also survived my grandparents' move to England. So if this is all you see on here for the next few months you now know why!
Hope you're having a good weekend :)
Posted by Anna Betts

very cool. My great uncle was a chemist that traveled quite a bit for work. He was really into bringing back specialties from the various regions...a big one was coffee from South America, back a few decades ago when everyone else was drinking the nasty canned stuff. It is interesting to think about how much travel and the idea of travel has changed, given how easily we can get some of the products and see vivid images. Your project sounds really cool.